From guns to pensions to sales tax cut: 7 things from a crazy day at the Stateho

TRENTON — It was a key voting day that started just after noon — and didn’t end until well after midnight, with the state Assembly passing a surprise sales tax/gas tax deal cut with Gov. Chris Christie.

Here are seven things that happened during a marathon Statehouse session Monday, including votes on the state budget, pension reform, gun control, and more:

But after hours of negotiating Monday, Christie, a Republican, and Assembly Speaker Vincent Prieto (D-Hudson) emerged around midnight with something else entirely: a deal to counter the hike by reducing New Jersey’s 7 percent sales tax to 6 percent by 2018.

Members of the state Senate apparently weren’t on board and left without a vote. But the Assembly approved the proposal around 1 a.m., despite fierce opposition from Assembly Transportation Committee Chair John Wisniewski (D-Middlesex).

Christie, meanwhile, held a late-night session with reporters championing the agreement outside his office:

Christie on tax deal Gov. Chris Christie discusses a light night deal with assembly leaders at the statehouse in Trenton.

Christie has until Friday to sign a balanced state budget. And both the Senate and Assembly took only minutes Monday to pass a $34.8 billion version proposed by Democrats.

Now, their version heads to the governor, who is likely to make some changes before signing it.

Senate Democrats and a handful of Republicans were about to vote to override one of Christie’s repeated vetoes of legislation to preserve open space, farmland, and historical sites in New Jersey.

But the governor, who has never been overridden, struck a last-minute deal.

The Assembly voted to place a controversial referendum on the November ballot asking New Jersey voters to commit to spending billions of dollars to repair the state’s public worker pension system.

Now, it’s up to the Senate to give final approval to putting the question before voters.

In their ongoing battle over New Jersey’s tight gun control laws, Democrats sent Christie a bill that would more strictly define the «justifiable need» residents must show to obtain a permit to carry a handgun in the state.

The governor, though, is likely to veto the measure.

In another firearm-related vote, the Assembly sent Christie a bill that would revive personalized handguns, or «smart guns.»

But, again, the governor is expected to reject it.

In yet another firearm-related vote, the Senate was supposed to attempt to override Christie’s veto of a bill to make sure people convicted of domestic abuse in the state were strip of their guns.

But with one state senator not present, the vote was postponed to Thursday. 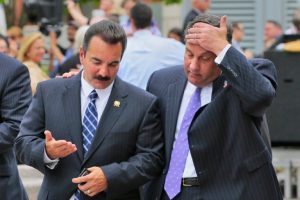