TRENTON – Acting Attorney General Christopher S. Porrino announced that a Newark man was sentenced to state prison today on first-degree charges of carjacking and armed robbery in connection with a crime spree in February 2015 that ended when state troopers spotted him in a stolen minivan and arrested him.  During his arrest, one of the troopers shot and wounded the defendant when he drove the stolen minivan onto a sidewalk and toward the trooper.

Steven J. Montgomery, 32, of Newark, was sentenced today to 17 years in state prison, including 14 ½ years of parole ineligibility, by Superior Court Judge Michael Ravin in Essex County.  Montgomery pleaded guilty on March 4 to carjacking, two counts of armed robbery, aggravated assault, possession of a weapon for an unlawful purpose, and eluding police.

“Montgomery’s violent two-day crime spree appropriately ended with him behind bars,” said Acting Attorney General Porrino. “With this sentence, we have ensured that he won’t be robbing innocent victims at gunpoint or threatening police for many years to come.”

“Armed carjackers and bandits like Montgomery sow terror in Newark,” said Director Elie Honig of the Division of Criminal Justice. “With this sentence, he is reaping the justice he deserves.”

“In the span of approximately 33 hours, Montgomery managed to terrorize the city of Newark with his violent and depraved acts,” said Colonel Rick Fuentes, Superintendent of the New Jersey State Police. “There is no doubt that the citizens of Newark are safer with Montgomery behind bars.”

Montgomery was shot by the state trooper on Feb. 9, 2015 on South 20th Street in Newark.  Under the Attorney General’s Directive on Police-Use-of-Force Investigations, the incident was investigated by the Attorney General’s Shooting Response Team, made up of investigators from the Division of Criminal Justice and the New Jersey State Police Major Crime Unit.  As a result of the investigation, Director Elie Honig of the New Jersey Division of Criminal Justice determined that presentation of the police-involved shooting to a grand jury was not required under the Directive, because the undisputed facts showed that the use of force was justified under the law.

In a statement to law enforcement two days after his arrest, Montgomery acknowledged his involvement in the following crimes, which were the basis for the charges to which he pleaded guilty, beginning with the theft on Feb. 8, 2015 of the silver minivan that he was driving at the time of his arrest:

February 8, 2015, 12:54 a.m.: at this time, a businessman closed his restaurant in the area of 251 Stuyvesant Avenue in Newark and was walking to his silver 2011 Honda Odyssey minivan when he was approached by Montgomery, who was wearing a black ski mask.  Montgomery pointed a handgun at the victim and demanded money and the keys to the victim’s vehicle.  The victim provided Montgomery with his cell phone and approximately $200 to $300.  Montgomery then took the victim’s keys, entered the victim’s vehicle, and drove away.

February 9, 2015, 8:30 a.m.: a woman was cleaning snow off her vehicle on Forest Hill Parkway in Newark when she was approached by Montgomery, who was driving the silver minivan.  Montgomery pointed a handgun at the woman and stated “come over here or I will kill you.”  The victim retreated to her vehicle and locked herself inside where she called the police.  Montgomery proceeded to bang on the window of the woman’s vehicle before returning to the silver minivan and leaving the area.  This incident is the basis for the aggravated assault charge to which Montgomery pleaded guilty.

February 9, 2015, 10:00 a.m.: Montgomery returned to the Park Avenue Sunoco in the silver minivan.  Montgomery exited the vehicle, and approached a bathroom outside the gas station which was occupied by a male Sunoco employee.  Montgomery banged on the door to the bathroom until the employee answered.  Montgomery pointed a handgun at the victim and demanded money.  Montgomery then took the jacket the employee was holding and removed approximately $350.  Montgomery, who was wearing a black ski mask, fled the area in the silver minivan.  This incident occurred approximately 30 minutes prior to the shooting incident involving the state troopers.  This incident was further captured by security cameras at the Sunoco station and a neighboring Dunkin’ Donuts.

With regard to the trooper-involved shooting, the investigation revealed that at about 10:30 a.m. on Feb. 9, 2015, four members of the New Jersey State Police were on patrol in Newark when they came upon the stolen silver minivan driving south on South 20th Street near 18th Avenue.  Two troopers were in one vehicle in front of the silver minivan, and two more were driving behind the minivan, which the troopers knew was on a “hot list” because it had been reported carjacked at gunpoint the prior morning.

The trooper driving the vehicle in front of the minivan attempted to use his vehicle to block the roadway on South 20th Street to stop the minivan.  The second trooper in that vehicle, who is the trooper who shot Montgomery, got out of the vehicle and drew his service weapon, announcing himself as police and ordering the driver of the minivan to stop.  Montgomery disregarded the command and proceeded to drive the minivan over a curb and onto the sidewalk on South 20th Street, heading in the general direction of the trooper.  According to the trooper, Montgomery then reached below the dashboard of the minivan.  With knowledge of the crimes linked to the minivan in the previous 36 hours and fearing Montgomery was reaching for a gun, the trooper fired two rounds, striking Montgomery in the shoulder and wrist.  Montgomery continued to drive recklessly down the sidewalk at a high rate of speed, and the trooper fired two additional rounds, which did not strike Montgomery.  Montgomery made a series of turns and continued driving for approximately one mile before crashing into a civilian’s vehicle at a stop light at the intersection of Grove Street and Nye Avenue in Irvington.  The civilian suffered injuries and was transported to a local hospital.  After the crash, Montgomery attempted to flee on foot, but was caught and placed under arrest by the two troopers in the second vehicle.  A search of the crash site revealed a Sig Sauer handgun, a BB gun and a black ski mask belonging to Montgomery. 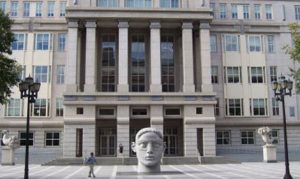